Yep.  Been awhile since my last post.  Isn’t that always the case?  I get so busy with life that I forget about these things.  Living in Hawaii hasn’t exactly helped either.  Also… 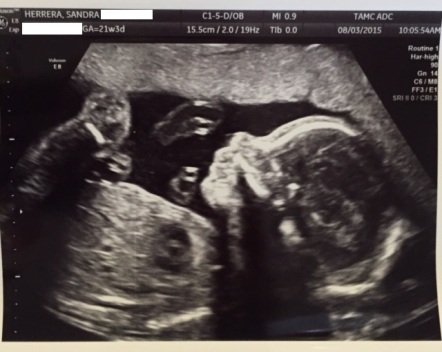 Yes that’s right!  We’re expecting a baby boy in December!  Not exactly planned, but sometimes life is like that.  We couldn’t be more thrilled, though.

I was lucky, and I had a relatively easy first trimester.  Not too much morning sickness, just a lot of fatigue!  I was even able to do a parade on the big island of Hawaii at 5 weeks along fairly easily (I had only found out earlier that week!).  Now I’m just over halfway done with pregnancy (22 weeks), and this is the first week that I’ve really noticed a change in my ability to play my clarinet.  As in, my breath support is really starting to suffer.  I just can’t breathe as deeply!  Phrases that I was easily able to play through in one breath before have become increasingly more difficult.  And my right side starts to ache after playing for awhile.  I guess this is how it goes…?

I’m trying to keep up with a regular routine of practicing, even though I have nothing really to practice for, other than clarinet trio at work.  Some days I get so exhausted that I allow myself to skip a practice sesion, but usually its not more than one or two days a week, if at all.  I’ve been focusing mostly on fundamentals – long tones, articulation, scales, and I try to work in an etude if I can.  I’ve really gotten into this Gillet technique book lately (which I don’t think you can buy anymore…I was given the book by a community band clarinet colleague in Colorado a long time ago, and its ooooooooooold).  If anything its helped me maintain my endurance while things are slow at work.

I’ve been approaching practice in a little bit of a different perspective.  I have discovered that mistakes are caused by a sheer lack of mental focus.  I have discovered that I generally play without this in mind.  In the past I have had a tendency to let my mind wander while playing my daily routine, so I started there.  I’ve been trying to focus on the task at hand, whether it be playing long tones, scales, or whatever mundane exercise I’m working on.  Living in the present, if you will.  It is harder than you think to execute if you’re brain is not trained in this way!  To not think about anything else but what you’re doing IN THE MOMENT is really, really difficult.  Us humans are so concerned about the past and the future, we tend to do many things with only those things in mind.

I’ve been trying this approach for a few months now and I still have good days and bad days.  But I’ve felt a incredible improvement in my overall playing, especially sight reading, which has never been my forte.  It has also opened my eyes to the fact that when I do make a mistake, 95% of the time it is because my mind is not “in the moment”, that in fact, I’m thinking of something completely different or even unrelated to music!  Quite a relevation.  And a frustrating one.  To think that I spent so many years playing/practicing like that!  No wonder I have trouble on auditions!  I think too much about the extraneous things (the panel of judges, for example), that my brain forgets that I have to play and execute the music.

Hopefully by changing the way my brain works while playing will help me win auditions in the future.  Its a long road, but I’m going to keep working!  I still have my eye on you in D.C., Navy Band!!