A few weeks ago, I clicked on an ad on Facebook about getting some samples of reeds.  I’m always up for new reeds, and I’m always up for trying something new.  I entered my address and info, and promptly forgot about it, until a few days ago, when I got a package in the mail.  This company, D’Addario Woodwinds, sent me six reeds to try (three each of two types)!  They are called Reserve by D’Addario.  I’ll be honest, I felt really cool and exclusive getting to try these reeds! 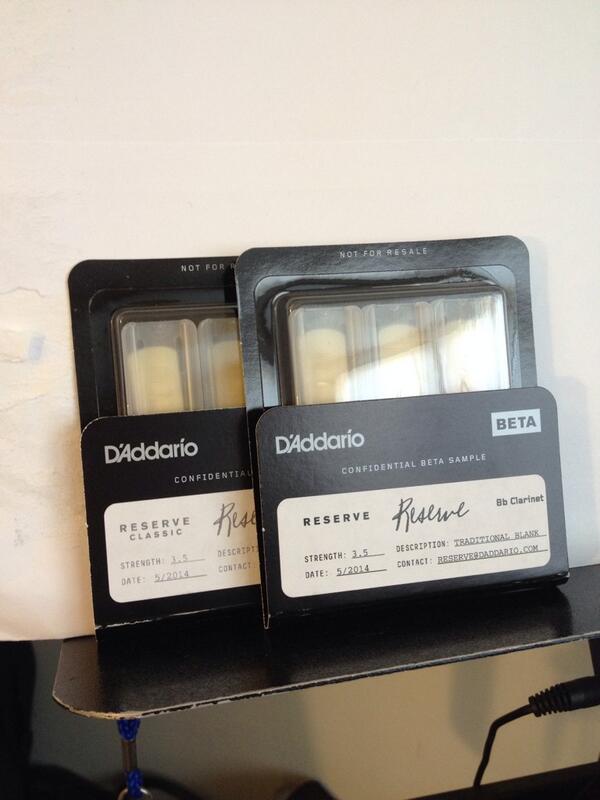 I started breaking them in just like I normally do.  First impression: very consistent.  In fact, this seems to be one of the major selling points of these reeds.  I really like that – there is such a wide variety of strengths and responses in a box of Vandorens that it was almost strange to have each reed basically play the same.  I also noticed that they come pretty well balanced already (unlike Vandorens!), I’ve had to do minimal balancing work, especially compared to when I’m breaking in my normal V-12s.  I think the 3.5 strength was a little soft for my setup, but I just sanded down the tips a little, and kept them high on the mp.  And after a couple days of playing them, they seem to be stiffening up a bit.  So far I’m favoring the “Traditional” over the “Thick Blank”, but its still early.  We’ll see how they feel in a month.

So far, I’m impressed with these reeds.  Like I said, its still early in the reed-breaking in process, but based on what I’ve experienced so far, I would most definitely recommend these reeds.  I’ll post a “part two” in a couple months after I’ve really used them, and I can more confidently give my recommendation.

Hi sandyclarinet. Just wondering how those D’Addario reeds turned out for you? Any comments on them please? Enjoy your fascinating blog! Thanks, Pauly from Down Under.

Hi Pauly, they were nice! I would recommend them to anyone looking for an alternative to Vandoren. I’ll have a more detailed post about them in a few weeks when I’m done with this next audition. Thanks for reading!