First off, Happy Thanks giving!  Ben and I were lucky enough to spend time with our friend Andy and his family for the holiday in Syracuse.  It was really great!  And I had my first garbage plate ever on Wednesday night.  I guess I couldn’t leave Rochester without having one!  Anyway….

the Youtube symphony auditions.  If I get chosen, I get a free trip to Australia to play with the 96 other people who get chosen at the Sydney Opera House.  Freakin sweet!  And the audition excerpts aren’t too crazy, only three excerpts plus Mozart.  Here is my final video that I submitted:

I am fairly happy with it.  I would like to mention that I am thinking the scherzo in two, not three (see my last blog entry) and it seems to help A

LOT!  I am pretty nervous about the Capriccio excerpt (the first one after the Mozart) because I’m rushing a little (ok – a lot!), but according to Ben it had the best energy.  I’m taking a risk by choosing style over technique.  We’ll see if it pays off.

Making the video was pretty labor intensive – I used my digital camera plus my minidisc.  During several test recordings that I did a couple weeks ago, I found out how crappy the sound is on my camera.  So I recorded both video and sound separately using the above mentioned equipment and then merged them together using Windows Movie Maker.  It took some time to get it lined up just right, but I think the end result was worth it! Lets just say, the “microphone” that is on my camera really doesn’t like the upper register!  So I did that first with all the raw footage,

adjusted the sound settings so that all you could hear was my minidisc recording, saved the movie file (which takes forever!!!  Stupid slow computer) and then cut and pasted the takes from there.  I made four separate (and very organized!) videos of each piece, and then I sat down and critically watched (more listened, actually) all of them.  Here’s an example (its my Beethoven takes – its the shortest one, I think you’ll agree that I got it on the third take!)

In other news, yesterday was my birthday!  I had a really wonderful day.  Started out with a 4.75 mile run, which was meant to be a 4 mile run, but
I ended up getting lost in the cemetery – lets not even go there with the jokes of getting lost in a cemetery on my birthday, haha.  I actually like
running through the cemetery here because there is lots of hills, and its actually quite peaceful and beautiful, despite all the dead people.  There are grave markers of people who died in the early 19th century!  Totally awesome.  Anywho…I then taught a lesson, and she actually practiced so it was a great and fun lesson.  After that Ben and I went to lunch at Aja
Noodle (which is our new favorite place to eat!) and then went window shopping at Eastview Mall.  The mall closed at 6 (WTF…no holiday hours???) so we came back home and hung out at home for a bit, I skyped with my mom and dad.  Then we went to Plum Garden for dinner – all I can say is SUSHI OVERLOAD.  It was so good though: 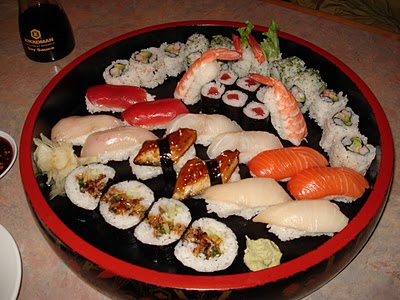 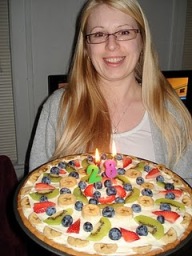 I was so full, I could barely move.  After dinner, we went to the cheapy theater and saw Despicable Me.  Cute movie!!  I enjoyed it very much.  After the movie, we came back home and we had birthday “cake” that Ben made, which was fruit pizza, it was sooooo good!  Way better than a regular cake 🙂 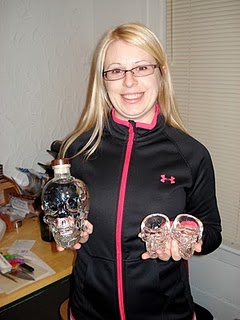 Here are the gifts that Ben got me, a new super fancy running jacket, and a skull shaped bottle of vodka with matching skull glasses.  I wanted it more for the bottle than the vodka, I’ve been eyeing it for awhile, since we go to the liquor store often because of Ben’s obsession with whisky.
Anyway, it was a pretty successful birthday!  And I still can’t believe I’m 28.  That means I’ve been an official adult for a decade and that means in two years I’ll be 30!  Eeeeeek!  Looking back, I’ve made plenty of mistakes in my ten years of adult life, but I’ve learned just as much!  I’ve also had plenty of successes and good times too.  At 18, I would have never thought I would be where I am right now, especially with the whole Navy thing!  Even two years ago, joining the military was crazy to me.  But I still think I will be happy with my decision to join, I think it is exactly what I was looking for.
Now I’m going to enjoy my extra day off!  Time for Christmas decorations!  And then back to the grind tomorrow…

One reply on “My directorial debut????”

Excellent playing Sandy. Your Beethoven is especially good. Wow. Good luck with the YouTube orchestra. I hope you get in.Best,David Thomas